Social Democratic and Labour Party Leader Colum Eastwood MP has urged political leaders to work together in the substantial common interests of the people of Northern Ireland to promote the advantages of the Ireland Protocol.

Responding to a legal challenge due to be taken by the DUP, the Foyle MP said that the courts will confirm what Arlene Foster already knows - that the protocol is necessary because of the hard Brexit that her party backed.

This week the SDLP will propose that the Executive bring forward a new recovery and investment strategy that takes advantage of dual market access guaranteed under the terms of the protocol. 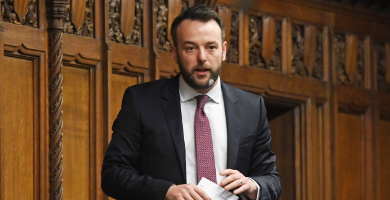 “The DUP’s legal action against the Ireland Protocol is ill-judged and will only further entrench the febrile political environment as well as creating further uncertainty for people and businesses.

“There will be few with sympathy for the argument that the protocol, which prevents a hard border in Ireland and guarantees dual market access for local businesses, breaches the Good Friday Agreement. That notion is stretched even further when the argument is made by a party that opposed the agreement in the first place. I'm sure the courts will decide what we all, including the DUP, already know. The protocol is necessary because of the hard Brexit that they supported.

“The protocol is here to stay. Political leaders should come together and make the most of the arrangements. To sustain the uncertainty of the last five years is no solution.”